We have found the best train tables for toddlers, and our top pick is the KidKraft Metropolis Train Table & Set. The table is classy, the accessories and pieces are adorable, and the storage is ginormous.

Read on for more information, or click the link below to read more reviews on Amazon. 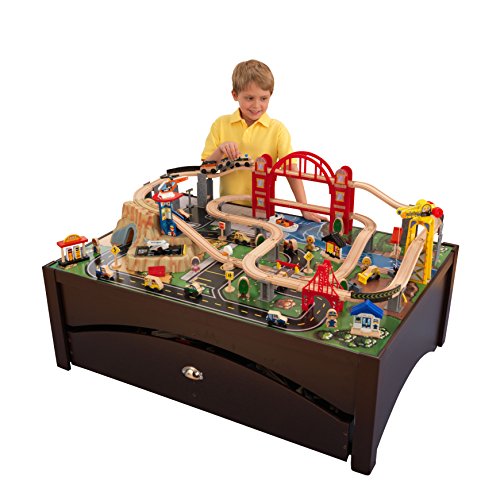 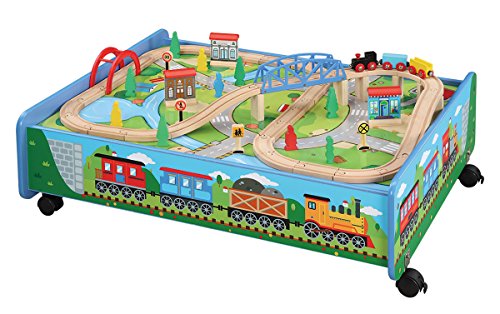 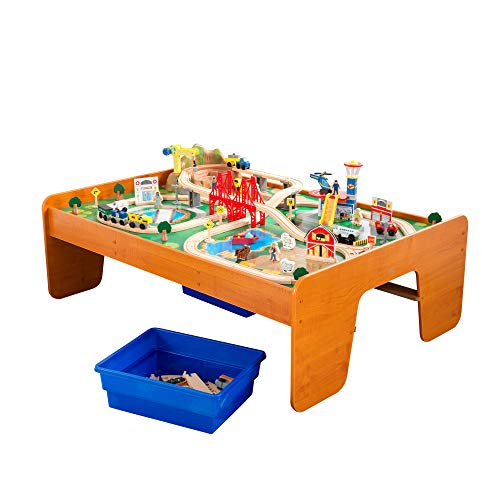 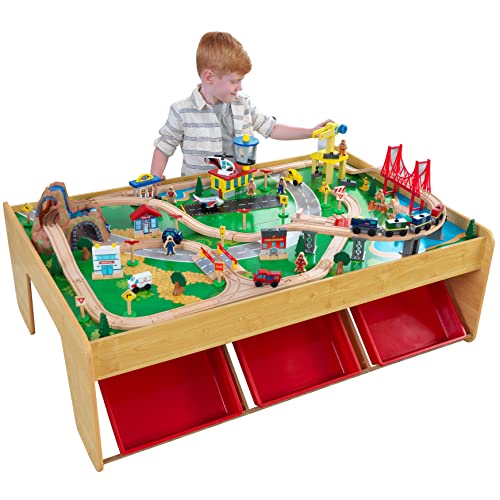 We love train tables! Who doesn’t? We learned a lot when looking through these choices, though. Here are a few train-table-tips before you shop!

There are some train tables without train sets. They’re just tables. These are not those. We’ve only brought you tables with train sets for this review. We hope this helps you find the perfect train table for your family!

At 46.9 x 32.9 x 26.8 inches, the table itself doesn’t take up a whole lot more space than the last one, but with the sliding trundle storage, it weighs a whopping 81 pounds. You really have to pick out a spot in your home before bringing it in, because it’s substantial. That being said, reviewers love this table and storage bin. It’s by far the most attractive, and reviewers said they love that it looks like a normal piece of “adult” furniture.

The storage bin is amazing. It seems to be the same size as the table itself, so if your kids are already crazy about trains and train sets, this is a great purchase. This set has 100 pieces in addition to the table including a big three-story bridge with two layers of track, an airplane, a helicopter, a police station, a working crane, a barge, and lots of other goodies like townspeople, buildings, and cars.

There are some small pieces, though, so this one is also for ages 3 and up. One big complaint, though, was the lack of a good-sized lip on the table to keep the train set and town from sliding off during play. Of all the sets we reviewed, this set has the cutest pieces. This set seems to have more female characters as workers and townspeople, too. We love that, because girls love playing with train sets, too.

KidKraft has gotten flack in the past for the lack of girl characters with their toys, so we were really excited to see that they’ve been listening to their customers. Again, this table setup takes about 20 minutes to assemble for most, while the train and “town” set up takes between 90 minutes and 3 hours if you try to replicate the photos of the set online.

By the way, if you need a bit of comic relief, you should read through some of the reviews for this one. There are some pretty funny descriptions of the dramatic time reviewers had during their setups.

We like train tables, but this is our favorite one – even among those not reviewed here. We looked at many tables, but this one is the nicest looking as far as furniture goes. We love that girls are included in the characters. We think the accessories are the cutest. This is our top pick, for sure.

This set is perfect for a family without a lot of room. It’s a small table on wheels with a 62-piece playset. Some of the pieces are very small, so this is not a great fit for children younger than 3. This set is universally compatible with all major wooden brands including Thomas, BRIO, and Melissa & Doug.

Reviewers really like this table and playset overall, partially because they love the size and convenience of the table. Another draw is its price. Other tables cost at least three times as much on average. Because this table is more compact, the price reflects its smaller size. And there is a lip! Some reviewers also say that the parts of the track aren’t stable, especially on the bridges and overpasses, but that seems to be fairly common among train tables and their pieces.The only real drawback reviewers noticed is the lack of storage.

Many larger tables come with built-in storage, which is one of the reasons people love train tables. This little table, though, does not come with storage space or storage bins of any kind. Several handy and creative reviewers figured out solutions for that as well and shared it in their reviews, though, so if you do purchase this table and need storage ideas, that may be the best place to stop first.

Most people who buy and review this little table really like it. It’s small enough to fit into tighter spaces and doesn’t take over a room like many of the other train tables do, but it still comes with lots of play pieces. The table itself is on wheels and is decorated to be a part of the play scene. If you have limited space, this may be the perfect set for you – and it tends to be a better price than the others, as well.

As far as size goes, this table would eat that last table for a light dinner. It weighs 43 pounds, and the measurements are 47.8 x 34.2 x 16 inches. This is definitely furniture. It comes with two storage bins, and 100 play pieces, including a three-piece train, an airport with a helipad and control tower, and a hospital with an ambulance. There is a construction area with a moving crane, and there is a multi-level bridge.

The surface of the table is part of the playscape as well. This set is compatible with other KidKraft sets, Thomas and Friends wooden train sets (only the wooden ones, to be clear) and BRIO wooden train sets (including vehicles from those sets).

Reviewers love that this set is big enough for several kids to play together. Multiple ages can (and actually do) play with it simultaneously. The assembly for the table is easy, only taking about 20 minutes to a half-hour for most people to put together. The instructions for the table are included, and most reviewers found them easy to follow. There are no instructions for the placement of the “town”, however, and most reviewers say this is what took them the majority of the time – looking up pictures online and replicating the placement in order to get everything on the table.

The price is steeper for this set than the last one, but reviewers say the price is fair and this table and set are worth every penny. This set has some small pieces, so it’s best for kids ages 3 and over.

This is a good table. It’s got lots of stuff to play with, some storage bins, and lots of room for imaginative play. We think kids will really enjoy this set. We also love that it’s compatible with lots of other sets – a real necessity in the train playset world!

There are three plastic bins that can slide under the table into slots for storage. There is a lip to keep those trains and pieces in place on top of the table, and the landscaped play board can be turned over to look like a regular table, which is nice when you want to have a plain surface showing.

Reviewers like this set. They like all of the accessories – lots of vehicles, little people, signs, trees, and a waterfall. Kids love the waterfall!

The table itself is easy to assemble, again, but one reviewer was kind enough to tell folks that with this set (and we imagine some of the other KidKraft sets), even some of the toys have to be assembled. Also mentioned was the fact that some of these toys have very small parts and screws. Set aside time with the kids otherwise occupied for that as well when you get this set to keep them from getting into any harmful mischief.

Several reviewers complained that the table itself comes scratched and damaged, while others were frustrated that things like LEGOs and other toys easily damaged the table. If you buy this one, be careful with placing anything on it that may have sharper corners or edges

If you can find this table on sale, get it. It’s a good piece with lots of fun accessories, and the waterfall really adds fun and excitement to this set. It has lots of vehicles, a moving crane, and some other fun features, and we love that the tabletop can be reversed. The attached storage bins are a huge win, as well.