We have found the best karaoke machines for kids, and our top pick is the Weird Tails Wireless Bluetooth Karaoke Microphone. It lights up, it’s wireless, and it has the longest use time when charged up. It also connects to virtually any device, making it easy to find something compatible so your child can access an endless variety of their favorite songs.

Read on for more information, or click the link below to read more reviews on Amazon. 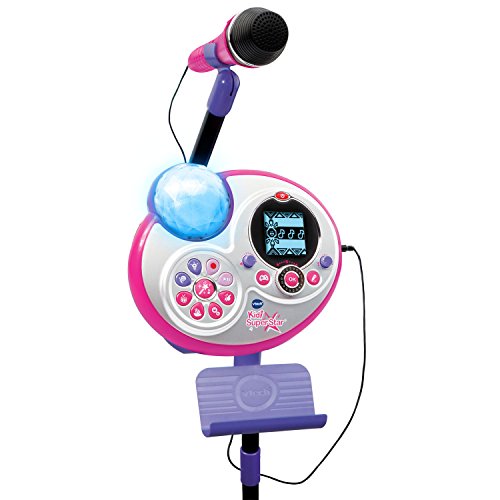 Remember Karaoke, with the screen, the words on powerpoint, and endless hilarious moments with your friends and family members singing ridiculously off-key?

Well, Karaoke has changed a little with the times. It’s no longer necessary to have a big, bulky, overpriced machine to use while you belt out your favorite tunes. Your kids will love these portable, far simpler options. Several of them come with lights, voice changing features, and easy ways to access songs in the most modern ways.

In fact, you may love a few of them yourself! You can always tell people you’re buying it for your kid, though. Go ahead. We won’t tattle.

Best Karaoke Machines For Kids This 2020

This is another mic option with Bluetooth connection. One difference with this mic is that it’s universally compatible with Apple products, Android, Mac, Laptops, TVs, PCs, and MP3 players. It’s one of the best karaoke machines for kids today.

Reviewers say it’s easy to use. The biggest difference for reviewers is that this mic can support an SD card so music can be downloaded and used when not connected to other devices. The SD card is not included, though, so be sure you purchase one separately if you think you’d like to use that function.

Another fun feature is the built-in LED lights that flash along with the music. It has a lithium battery, like the others, and can be recharged, lasting for 5 to 10 hours of playtime. It has high-density noise reduction, an echo function, and a total of 5 fun voice changes.

This mic isn’t just for kids! It’s a real crowd-pleaser. It’s universally compatible and can be used with just about every device available. The LED lights that flash in time with the music bring fun to any “concert”. To top it off, it has high-density noise reduction, an echo function, and 5 voice change features.

This cute little monkey microphone and speaker combo comes in three colors – black, green, or pink. It doesn’t come with its own songs, but it can be connected by Bluetooth or USB cord to smartphones, tablets, computers, or smart TVs. It works with both iPhone/Apple products and Android. It has cordless capabilities and is powered by a lithium battery. It requires 3 to 5 hours of charging time for 5 to 8 hours of use.

Reviewers love that they can control the volume of the microphone, as well as adjust the echo feature, with their mobile phones or other devices. Your child will have to press the power button to sing, but other than that, it’s very kid-user-friendly. There are two fun voice features, and reviewers said they like that there seems to be a noise reduction feature. It’s not too loud (as some kids’ toys can be), but it is loud enough to hear the music and your child’s voice through the microphone.

Reviewers also said it seems pretty durable, and several said that when kids and other parents come over for playdates, they are always asked for the link so the visiting families can buy their own.

Kids love the adorable monkey, the fun colors, and the fact that the microphone and speaker are portable, making any room they enter into their own personal performance stage. This microphone is for kids ages 3+

This portable monkey microphone and speaker can connect via Bluetooth to just about any device so your child can access apps like YouTube and other music-playing sites and apps. It’s rechargeable and durable enough to withstand the wear and tear of preschoolers who love to perform.

This wireless Karaoke microphone and speaker also runs off of a rechargeable lithium battery. Several reviewers say it’s “beyond a toy”, and works much better that they expected it to. The sound is good for a microphone intended for kids. In fact, adults who buy this toy for their kids say they occasionally have to steal it for their own singing sessions!

Both the charging and working time is a little less than those for the Gaobige microphone mentioned above. This microphone takes 2.5 hours to charge, and has between 3 to 5 hours of working time once unplugged. This microphone can also be paired with iPhones via Bluetooth. It connects to Android devices with a USB cable (included with a microphone). Although it doesn’t have its own music included, you can use these connections with music apps. The manufacturer mentions YouTube, Pandora, and Spotify specifically.

Reviewers say that they love the cool and sturdy carrying case that comes with the mic. Kids love it, too. Kids also love that the mic is the perfect size for them. Adults love that the outer shell covering the microphone is durable and keeps the mic safe if it’s dropped. , And these are some of the reasons why we included it on this list of the best karaoke machines for kids

However, reviewers don’t love that there’s no volume control on the microphone itself. They also say it isn’t loud enough unless it’s in “echo” mode. They also don’t like that the mic doesn’t have its own music but that you have to connect to apps using Bluetooth if you want music. The microphone can be used on its own, though.

This mic is great for kids four and over. It doesn’t have its own music, but it does connect via a USB port (cable included) for Android devices or Bluetooth with iPhone devices so little singers can access music on apps. It’s sturdy, cute, and comes with a durable carrying case. The biggest drawback is that adults like it enough that they may want to borrow it for their own Karaoke parties.

This is a little more like the traditional Karaoke machine. It comes with 8 built-in songs. It’s a little more than just a microphone. The microphone is on a stand, and there is another piece that plays music, includes 6 little games, has a disco light, and can record up to 5 minutes of performance. The attachment can be removed and carried around along with the mic and features cute little animations. The mic and attachment stand is adjustable and can be either 28.5 or 53.5 inches tall.

Reviewers say the stand is a little lightweight and seems fairly cheaply made, though. With the included songs, there is a “music magic mode” which can remove or reduce the main vocal track from songs so your child can be the performer he or she has always meant to be. It also has four voice-changing effects.

Another fun feature is the sound effects – applauding, clapping, and laughing sounds. In addition, it does have an MP3 connection which can be used to play songs via iPhone, Android, CD player, or MP3 player. It doesn’t connect via Bluetooth, though, and newer iPhones need an additional adapter to connect to the headphone jack. This is not powered by a rechargeable lithium battery, but 4 AA batteries. It can also be powered by a plug/adaptor, but you’ll have to buy it separately if you hope to use that option.

This is closer to the traditional idea of a Karaoke machine for kids. It comes with a few songs, and has some cute additional features including a few games, a disco light, and sound effects. It can even record a bit of your little superstar’s best performance. Reviewers do say that parts of it seem cheaply made, and they don’t like that it requires batteries. Kids love the fun effects and additional features, though.